All eyes on latency?

Last week I attended the 81st IEEE VTC conference in Glasgow, Scotland, to present my co-authored paper titled “On the Feasibility of Blind Dynamic TDD in Ultra-Dense Wireless Networks”. As always, key trends and enabling technologies for the 5G ecosystem were on full display in many of the presentations, with not surprisingly xMBB driven to its extreme by UHD 4K/8K video and 3D online gaming at the top of the list.

Listening to the speakers in the panels and plenaries, though, there seemed to be a growing emphasis on latency rather than ever more capacity this time, which is especially important for delay-intolerant applications and mission-critical services with smaller payloads, as well as for maintaining a certain quality of experience. In one of the workshops, the French operator Orange listed capacity on a less impressive 7th place on their priority list on the network side, with lower power consumption, cost efficiency (surprise, surprise), and greater flexibility for future evolutions instead claiming the top three spots.

During the panel session on “What is driving 5G?”, Prof. Rahim Tafazolli, director of 5GIC and Institute of Communication Systems at the University of Surrey, echoed this sentiment by saying that minimizing end-to-end delay had not been researched enough and that it demanded more attention going forward. A few proposals were however made by some attendees, including more flexible frame lengths and shorter TTIs in the air interface, as well as more efficient tunneling protocols in the higher layers.

Also attending the panel was Paul Crane, head of Practice, Research and Innovation at British Telecom. In his short introductory talk, he included a slide from a GSMA report showcasing different use cases with respect to latency and data rate requirements. The idea was to show that existing LTE/LTE-A technology seems to provide good enough speeds for many of the use cases envisioned for 5G. The additional cost will instead come from lowering the end-to-end delay which he predicted may have a not so negligible impact on the business model of BT and others when thinking about things like the tactile Internet. 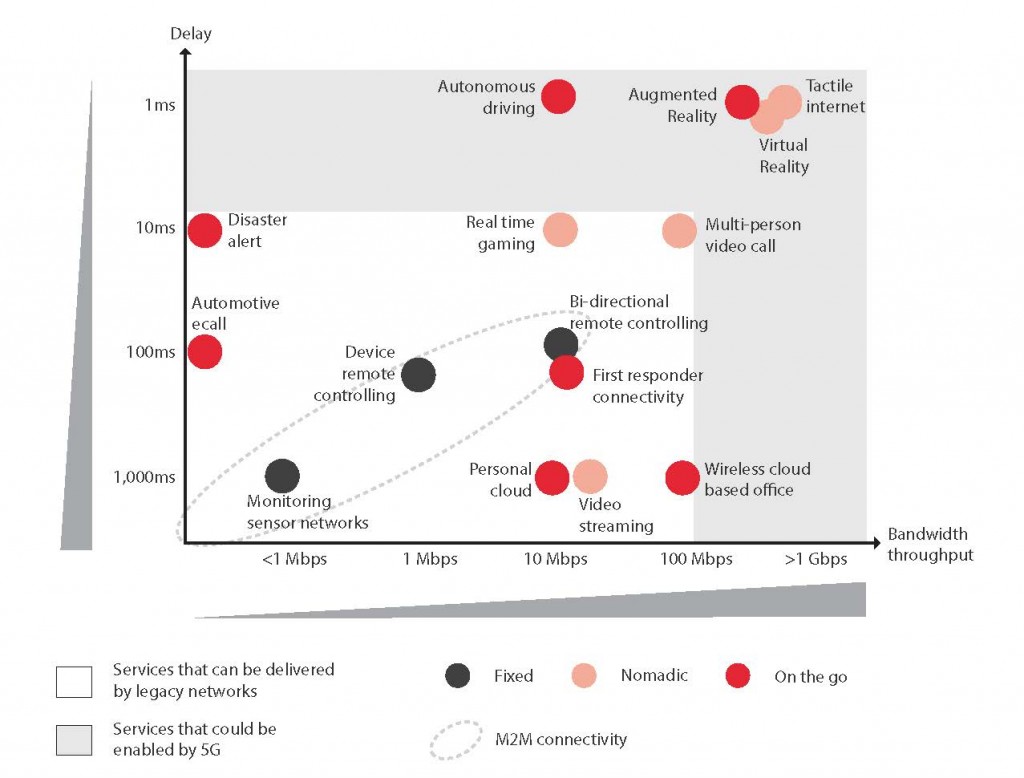 In the case of automated driving which also appears high up in the chart, the circumstances are a bit different. Latency is for obvious reasons a critical requirement, but not necessarily the toughest. As noted in one of the plenaries by Dr. Luca Delgrossi, director of Autonomous Driving U.S. at Mercedes-Benz, an even larger issue is the need for a dedicated short-range broadcast channel since point-to-point communication in the context of V2V eventually becomes way too burdensome for the network to handle as the number of connected cars increases. Who will end up facilitating (paying) for these spectral resources is at this point less clear.

This entry was posted in Conferences, Systems and tagged IEEE VTC. Bookmark the permalink.