My first attendance of an international (IEEE) conference took place last week, in the 81st IEEE VTC conference in Glasgow, Scotland. As expected, the conference was fully tagged with 5G technologies, mmWave, massive MIMO and etc. However, an exhibition held by NICT (Japan) on TVWS and geolocation database prototype drew my special attention. The prototype included IEEE 802.11af system and LTE system operating under TVWS as well as White-space database.

I did my master thesis ‘Potential capacity of Wi-Fi system in TVWS’ based on geo-location data base method, by which we can obtain the transmit power limitation and frequency availability. When I saw the real geo-location database prototype, I was surprised by the accuracy and real time performance. 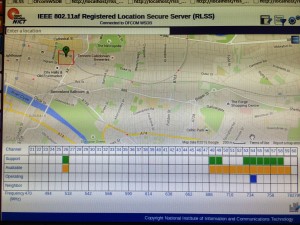 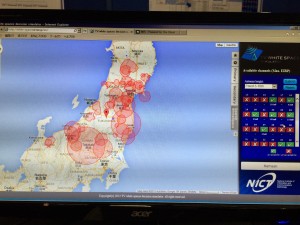 On the left, it is the geo-location database for the city of Glasgow. The pinpoint is VTC conference center, shown with available frequencies of that place and the supported frequencies of the hardware. On the right, the database of Japan is displayed.

I made an question to the exhibitor about the requirement of the user device for TWVS signal. He then showed me the cellphone made in Japan (photo below). According to him, the cellphones produced in Japan are equipped with TV antennas so that they can watch TV on the phone. In this case, the cellphone can utilize TVWS for communication in a very easy way. 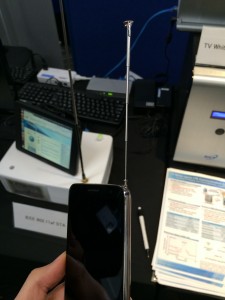 Ironically, although all the prototypes are produced by this Japanese company and the geo-location database for Japan is setup already, the Japanese regulator hasn’t allowed TVWS for commercial communication,only for some broadcasting use.

As most research goes to high frequency to obtain wide bandwidth for 5G, the role of TVWS is somehow embarrassed. The utilization of TVWS is quite limited by location and regulatory, destine not to be welcomed by large commercial use. But its favorable properties and cheap price (as long as authorized as secondary user) are still attractive. I wonder who will adopt this ‘child’ at last.

This entry was posted in Conferences, Spectrum and tagged 5G, IEEE VTC, TVWS. Bookmark the permalink.