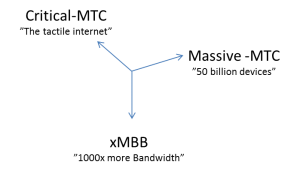 I was visiting our “sister center”  5G-Lab Germany  at their Academic Interaction Day yesterday. An interesting crowd of distinguished researchers was discussing the key design challenges and architectural concepts for 5G. There was a wide consensus about the three design dimensions (left) and that the “more bandwidth” (xMBB) and “50 billion devices” (M-MTC) -challenges probably can be managed in a more evolutionary manner. The key here is not what air interface will be used, but that the system architecture will also in the future be based on “best-effort” IP, i.e. the “internet”-solution. In this architecture with its transparency due to the “end-to-end principle”, keeps the network  completely separated from the applications, and almost any current and future application will be able to use the network. This is key to the immense success of the “internet”. 15 years ago everyone wondered what would be the “killer application” that alone would pay for the infrastructure. No one asks that question today as IP-connectivity itself is the “killer app” – enabling millions of application today – and the millions future applications that are yet to be invented.

What the “best-effort” internet solution cannot deliver is performance guarantees – low delay and high reliability. The way this has been traditionally managed in IP networks is by “overproviding” resources – higher and higher data rates. This however an expensive way to achieve QoS in wireless networks – in particular if the reliability figures contains many “9:s” and the delay is creeping down into the ms-range.  Reaching the low ms-range required for tactile/haptic interaction,  is also limited by the speed of light (300 km/ms). Control loops including cloud servers 100:s or 1000:s of km away will thus not allow for the extreme low latencies. These issues are very much in the focus of the  5G-Lab Germany  .

The solutions proposed include “edge clouds”, computational resources close to the base stations. If we want to control a mobile unit, say a driverless car, the (virtual) “edge cloud”  would have to follow the mobile devices and has to be “handed-off” to as the mobile unit moves to far from the original location.  This sounds like a great technical solution – it has one significant drawback, however.  I will require services inside the network, which violates the “end-to-end” principle.  The “tactile internet” is a very compelling term, but is likely to be a contradictions in terms. Yes,  there will be low latency connectivity, but its hardly the best effort, end-to-end “internet” that will be used to provide this connectivity. More “intelligence inside” is adding value to networking which of course is something the network operators would love, but deploying edge clouds together with a new 5G air interface specially designed for the C-MTC case will require significant investments. Will this turn the clock 15 years back – will we again ask what is the killer application ? Alternatively, is the class of possible future low latency applications enough to trigger these  investments?

The alternative solution – using the best-effort network – is the semi-autonomous car. This car would handle all fast interactions (e.g. avoiding collisions) locally (which corresponds to distributing the “edge-cloud” to the mobile units themselves), whereas the remote control over the network would be using longer time constants (e.g. route guidance).

Professor Jens Zander is professor in Radio Communication Systems at the Royal Institute of Technology, Stockholm, Sweden. He has been among the few in Swedens Ny Teknik magazine's annual list of influential people in ICT that have been given the epithet “Mobile Guru”. He is one of the leading researchers in mobile communication and is the Scientific director of the industry/academia collaboration center Wireless@KTH. His research group focuses on three main areas – the efficient and scalable use of the radio frequency spectrum, economic aspects of mobile systems and application and energy efficiency in future wireless infrastructures.
View all posts by Jens Zander →
This entry was posted in Internet of Things, Systems. Bookmark the permalink.