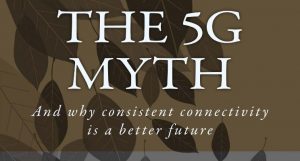 The 5G myth is the title of book recently published by William Webb.  A short summary of the book can also be found in the summary William published on LinkedIn.  The authors dissects and debunks some of the hype – in particular the “need for speed”.  In particular, he states:

“….that it is in the interests of all the key players to be supportive or even strong promoters of 5G. Academics benefit from 5G initiatives as sources of funding. Manufacturers rely on the roll-out of 5G to provide a boost in revenues. Operators fear if they step out of line they will suffer competitive disadvantage. Governments see political benefit in being supportive. It is in nobody’s interest to rock the boat”

The emperors new clothes, indeed. Further, he notes that

“…  the visions are too utopian. Achieving them would require astonishing break-throughs in radio technology and for subscribers to be prepared to significantly increase their spending. Both are heroic assumptions. In practice, most visions can be adequately achieved with existing technology such as evolved 4G, evolving Wi-Fi and emerging IoT technologies”

Indeed true. The parts of the visions that cannot be dealt with in an evolutionary fashion are mainly those related to very short delays and extreme reliabilty. It is hard to see the business case for a massive and costly deployment of the required “revolutionary” new system tailored for some “extreme” applications. Sure remote control of vehicles, remote surgery and virtual reality are exiting applications, but neither of them are likely to be the “killler application” needed to pay for it all.  Williams vision for high reliabilty wireless access everywhere with todays data rates make much more sense to me to.

Professor Jens Zander is professor in Radio Communication Systems at the Royal Institute of Technology, Stockholm, Sweden. He has been among the few in Swedens Ny Teknik magazine's annual list of influential people in ICT that have been given the epithet “Mobile Guru”. He is one of the leading researchers in mobile communication and is the Scientific director of the industry/academia collaboration center Wireless@KTH. His research group focuses on three main areas – the efficient and scalable use of the radio frequency spectrum, economic aspects of mobile systems and application and energy efficiency in future wireless infrastructures.
View all posts by Jens Zander →
This entry was posted in Business, Systems and tagged 5G, business model, Hype. Bookmark the permalink.